Tadayoshi Okuda, a researcher of the engineering division of Appliance Company, says that “to make audio products for customers who are particular about sounds” is what Technics aims for. As strong as our commitment to customers is, and as challenging as it is to meet customer needs and wants, it is that much more motivating.

Okuda likes home appliances, in the first place. He says, when he was a child, he dissembled his father’s broken stereo to play around it, and so, it was natural for him to think, “I wanna get a job that gets me involved in development one day.” Okuda was interested in home appliances and product development. What made him decide to join Panasonic was “because there was an audio department.”

Okuda was majored in electrical & electronics engineering in college, researching neural networks, but was assigned to the video technology department when he joined Panasonic. It was when terrestrial digital broadcasting just got started and development of Blue-ray products dawned back then. He mainly engaged in the development of high-definition video signal processing technology for about 9 years. At the time he was hoping to pursue genuine video and sound technologies, he was then appointed as a member for the return of the Technics brand, and was in charge of the development of audio amplifiers.
The most important value that Technics holds is this: “High-quality hi-fi sounds”. He tries to listen to various kinds of music, with an aim to keep an ear out for “high-quality sounds”. For Okuda, “high-quality sounds” mean 2 things. One is the sound that enables you to picture a certain scene in mind, and the other is the sound that conveys the energy that the artist wants to deliver.
What is exercised in his brain the most with “Art x technology” is how to make abstract ideas materialize. Engineers break through physical attributes such as frequency response and S/N ratio quantitatively in numbers, so it’s impossible for them to figure out how to “produce high-quality sounds” with just the same approach. Okuda thinks that delivering the emotions the artist conveys in music is important, so he actually goes to the recording studio to watch the sound production on site. Even with the same device specifications, sound changes, depending on the listening environment. Collaborating with the Berlin Philharmonic in Germany, he hopes to give useful feedback on product development by gaining exposure to the sound production at the concert hall.

■Collaborating with the Berlin Philharmonic on technology development
https://www.panasonic.com/jp/corporate/technology-design/r-and-d/berlin_collaboration.html

Looking at the next wave of smart speakers

Audio products are such hobby goods that they differ from daily necessities. It becomes necessary to narrow down target customers to those who are particular about sounds when it comes to manufacturing. Even if it materializes in the form of a finished good, it is not the goal to end just there. For example, customers who are particular about sounds know that the sound changes by how the speakers are positioned, thus enjoying the difference, and adjusting the speakers daily as a hobby.
On the other hand, there is also demand for more handy devices that still produce good sound. The way sounds are projected from the speakers will change depending on certain factors like the shape of the room, the material the walls are made of, and the reverbs. The Technics team also works on sound correction technology. Using a built-in microphone of a smartphone to detect the acoustics of the room and adjust settings accordingly is one example. They are actively engaging in not only Hi-Fi audio but also digital audio, aiming for music playback with better sound quality.
The Technics has a theme which is to enjoy analog music in a series of acts like wiping the dust off the gramophone record and dropping the needle. However, the world now has AI-powered speakers, and you can enjoy music with little effort. What’s next after smart speakers? This is what the Technics team aims at. It’s some sort of fusion of analog and digital.

Okuda says, “when I see customers using the products that I was involved in developing, it makes me think that ‘our technology was able to contribute value’ and feel immense joy from it”. Such is what Panasonic does as a captivating company that develops B-to-C products. Okuda explained with great excitement with the sparkle in his eyes that he feels it an honor to be involved in developing technology that is included in the catalogues, and that as an engineer, he will continue to strive to search for the impossible, and make the impossible possible. 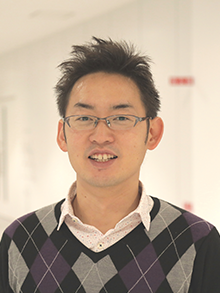 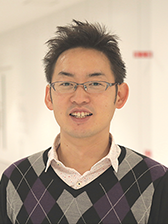